Shatila, forty years since the massacres

Forty years ago, in September 1982, took place the massacres of Sabra and Shatila

For 3 days, so-called “Christian” militias, supported by the Israeli army, massacred the civilian population of the camp1. The exact number of casualties is unknown. Some estimate the number of victims between 1500 et 3500.

Forty years after the massacres, the refugees of the Shatila camp still live a life confined in the shadow.

With this background of misfortune, even if the young Palestinians feel “dispossessed of everything even of their dreams”, life grows, stronger than death, intermittenly, simply, calmly, and stubbornly.

In the shadows of Shatila,

…children are born and grow. They are educated, like most children in the world they do their homework and project themselves into the future. Even if their horizon is blocked by ruins, their lives don’t seem as blocked. The best guarantee for hope.

…young people are looking for work, training, organizing themselves, doing “odd jobs” despite their refugee card as only identity document which prohibits them from working in more than seventy jobs in Lebanon and makes travel almost impossible.

…couples love each other, make children they love, educate, and school.

…the older ones ponder their entire history and compare the present days with those before their deportation2.

The images presented here are the fruit of fifteen years of work. The intention is a testimony to the life of Palestinian Refugees in the shadows of a “Civilisation” that has forgotten them for too long.

I wanted to give a name and a face to a population that has, too often, been anonymously diluted in sterile statistics.

1 There is a vast and extensive corpus of litterature about the subject. I have done my best to summarize the history of the Palestinian refugees up to the massacres and the war in the camps in my book “à l’ombre de Chatila” (In the shadow of Chatila), available on this site.

Children in the alleys of Shatila

Shatila, UNRWA camp. Kheir Mohsen was born 1951 in Chatila. 1973, during a demonstration, he loses his eye sight after a beating by the Lebanese army. He lives with his wife and 5 children in a 2 room apartment inside the camp. There is no heating or air conditioning. 1985, during the “camp wars”, his wife was hit by a sniper while helping a red-cross worker save a wounded man. She lost her left leg. Kheir Mohsen and his family live with less than 200 US dollars per month.

Shatila, UNRWA camp. At the PRCS Health Center. (PRCS = Palestinian Red Crescent Society). Here all day patients are treated regardless of their nationalities. The patient is treated for symbolic sums, one or two US$ – vaccinations are done for free. Serious cases are sent to one of the nearby PRCS hospitals, mainly the one in the “Bourj al-Barajneh“ camp. Blood sampling.

Shatila, UNRWA camp. Hafez Ali Osman aka “Abu Hisham“ (father of Hisham) was born 1929 in Akka, Palestine. He worked for the British army from 1945, first as an aide then as a mechanic in the marine. He joins the Palestinian Resistance in 1947 until his deportation in 1948. Abu Hisham died in 2008 at age 79 having spent most of his life in Chatila. (Acre = Akko in Hebrew and Akka in Arabic)

Shatila, UNRWA camp. Beit Atfal Assumoud. The kindergarten, two little girls play with their teacher, Ms. Maryam Shamieh. Beit Atfal Assumoud a humanitarian, non-sectarian and non-governmental organization was established in 1976 after the Tal Al Zaatar massacre. It provides services for Palestinian refugees in Lebanon and other disadvantaged people with other nationalities living in the camps or close to them.

Children from Shatila demonstrate for peace at the UNESCO.

Beirut, Lebanon. UNESCO center. The children of Shatila, wearing Palestinian keffiyehs, demonstrate against the foreboding war against Irak. One of the boys is holding a framed picture of president Arafat.

Shatila, UNRWA camp. Mohammed Shawqat Abou Rudaina at age 28. When Mohammed was five years old, he witnessed the massacre of his father, his pregnant sister and her husband, and three other members of his family. It took him 22 years to overcome the traumas and regain his taste for life. He now wants to finish school and study. Here we see Mohammed outside of his home.

Shatila, UNRWA camp. Beit Atfal Assumoud. The kindergarten. Beit Atfal Assumoud a humanitarian, non-sectarian and non-governmental organization was established in 1976 after the Tal Al Zaatar massacre. It provides services for Palestinian refugees in Lebanon and other disadvantaged people with other nationalities living in the camps or close to them.

Shatila refugee camp. Samira Abbas Hijazi, aka “Umm Ali“, is Lebanese and comes from the south of Lebanon. She was married to a Palestinian whom she lost during the “Tel el Zaatar“ massacres in 1978. Her daughter Zeinab, a young 17 year old newly wed, and her son-in-law are assassinated in 1982 during the Sabra & Shatila massacres. During the “Camp wars“ a few years later (1985-1987) she loses her son Ali, 10 years of age. Every time she talks about her memories, a surge of pain and tears appears, even 30 years after the events. Here one can see photographs of Zeinab and Ali. Today “Umm Ali“ lives alone in a one room apartment on the outskirts of the Shatila refugee camp, just a few meters from the UNRWA camp. She has no toilets or bathroom, nor kitchen. She earns her money as a cleaning woman in a kindergarten where she also has a small shop with sweets for the children. She earns 140 US$ a month. Her rent is 65 US$ a month.

War games in the alleys of the camp.

Shatila, UNRWA camp. War games in the narrow alleys of the camp.

Youssef was born Palestine and Roseanne in the Chatila camp.

Ghobeiri, Lebanon. Shatila Palestinian refugee camp. Yussef Majzub and his grand-daughter Roseanne. Yussef was born in Palestine and Roseanne in the Shatila camp.

Shatila, UNRWA camp. The camp is cleaned by specific UNRWA services. The bigger streets are cleaned every day. The smaller alleys every second day.

The kid’s horizon is filled with ruins.

Shatila. The UNRWA camp. The kid’s horizon is filled with ruins.

Shatila, UNRWA camp. Beit Atfal Assumoud. The kindergarten. Beit Atfal Assumoud a humanitarian, non-sectarian and non-governmental organization was established in 1976 after the Tal Al Zaatar massacre. It provides services for Palestinian refugees in Lebanon and other disadvantaged people with other nationalities living in the camps or close to them. The Shatila center has kindergarden classes and a dispensary. Dr. Ahmad Abu Rayya, the NGO’s dentist, treats Tarek, a pupil of the kindergarden. 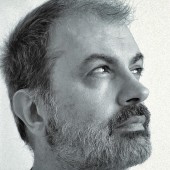